Free agentless security for up to 50 hosts. No credit card required.

We’ll ensure that your network has the best possible protection from day one.

Talk with an expert

How many Linux hosts do you need to secure?

Perfect for small deployments and trialing the product.

Sandfly is an agentless security platform purpose-built for Linux.

Sandfly is best understood as a compromise detection or intrusion tactics hunter. This is a shift in how many Endpoint Detection and Response (EDR) systems work as Sandfly specifically hunts for intruder activity the same way a very experienced Linux forensic investigator would. The difference is that Sandfly has a far deeper knowledge of attack tactics than a human investigator and we operate instantly and at very large scale with minimal performance impacts.

Further, Sandfly is 100% automated to check your systems 24 hours a day to give you instant alerts to trouble. With Sandfly running you have a constant presence on your Linux fleet hunting for intruders and without the risk and hassle of installing endpoint agents.

If you are an incident responder, Sandfly can be used in a manual mode to instantly assess systems for compromise and pull critical forensic data to speed up your investigation and clean-up. This allows your organization to get back in operation as quickly as possible saving valuable time and limiting damage.

If you are a Linux forensics novice, Sandfly does the hunting for you and tells you in plain English what the problem is if we do find something that is of concern.

Agentless means that Sandfly does not require installing any agents on your endpoints. As a result, unlike most endpoint-focused solutions available today, it can be rapidly deployed with virtually no chance of disruption or impacts on production systems.

We secure the widest range of Linux systems of any product on the market and protect virtually all distributions of Linux.

This spans, for example, systems that are 10+ years old up to modern distributions at cloud providers. Sandfly works with Linux versions running Intel, AMD, Arm or MIPS CPUs without any special modifications. We also support  embedded systems with MIPS or ARM processors such as Raspberry Pi. Basically, because of its agentless architecture, Sandfly only requires that your Linux hosts be running SSH.

Sandfly has been tested against the following Linux distributions, but will work on many more:

If you have a system that Sandfly cannot protect, you will simply get an error message in the management console when you try to add it. There is no harm caused to remote systems in trying and you may be surprised what we do support!

Because we are agentless, we are not tied to the Linux kernel in any way so we work across all of them - including systems over a decade old. This also means you can patch, upgrade or modify your kernel images to your liking and not have to worry about breaking Sandfly, or worry about Sandfly breaking your systems.

Yes - Sandfly is compatible and able to run in both private or public Cloud environments.

Because Sandfly is software-based and was developed largely on cloud infrastructure, it works immediately at places like Digital Ocean, Linode, Amazon AWS, etc.

More specifically, Sandfly is platform agnostic, not latency sensitive, and doesn’t care where the management server/nodes and your Linux hosts are located. As long as the systems you need to secure allow SSH access then Sandfly can protect them immediately. Whether it’s in the cloud, your own network, or any other configuration, Sandfly will work.

Basically, as many as you have resources to protect. The server/node architecture of Sandfly can be distributed using named queues and jump hosts to scale as needed. Each node for instance can protect many thousands of hosts with minimal  hardware resources, and new nodes can be added to scale upwards. Servers are limited only by the CPU/RAM you wish to dedicate to load scaling. Multiple servers can be used to distribute larger deployments. You can also choose how much and where to store forensic data according to your requirements. For context, we have customers like you using Sandfly to protect many thousands of Linux hosts.

Sandfly uses a server/node architecture. The nodes can each have a named queue to service where they reside and traffic is routed automatically to them as needed. For instance, you can have nodes inside AWS, Digital Ocean and on-prem. They can each operate inside firewalled perimeters and pass back results to the server without issue.

We also support SSH jump hosts so you can have Sandfly nodes outside controlled zones and use them to access these areas like other operators. You can even chain jump hosts together to move inside tightly controlled perimeters if needed through multiple hops.

A basic install requires one or more systems capable of running Docker (Sandfly is Dockerized) with these minimum requirements:

We also offer  a simple, single host install where both server and node run on the same system. However, for higher security and production performance, we recommend you run each on their own VM.

To keep install easy and fast, we offer automated installation scripts.  They take only a few minutes of your time to set up and run.

Once installed, you configure the platform by adding the hosts (and their access information) you want to protect, configuring any automated scans you’d like to run, connecting with any external platforms like Splunk - and that’s it. You don’t have to touch any of the secured endpoints. Sandfly will work to start securing them immediately.

Absolutely. Sandfly is unique in the industry because incident responders can use Sandfly to instantly scan and detect compromises even if no prior security monitoring is in place or even if other EDR products are operating but have not detected anything (yes, we've seen this).

For instance, you can point Sandfly at a cluster of Linux systems and get immediate results back about what they are, and their security status and start handling a situation - without first having to deploy software onto potentially compromised systems.

Further, once an incident is uncovered, Sandfly has hundreds of modules to help incident response teams investigate the affected systems and pull back almost any kind of critical forensic data from your Linux fleet - agentlessly. This is a unique and powerful feature during a real-world, fast moving incident when minutes matter.

Some examples of things we can help with during an incident:

Yes. We have built in connectors that can send data directly to Splunk and Elasticsearch. We also have the ability to send structured syslog directly to other platforms such as Graylog, Q-Radar or any other system capable of ingesting syslog data.

In addition to this, we have a full REST API you can query to pull events as you see fit.

Sandfly offers a free Splunk connector available in the Splunkbase:

No. Sandfly is completely self-contained. It sends no data back to us and does not ship potentially confidential data from your systems off-site for analysis. Even if an attacker were to compromise our own (Sandfly) systems, it would never reveal any customer operational data. We simply do not collect and store any information to leak. This is intentional.

Sandfly is designed to work on networks that are on the Internet, those heavily segmented or those that are air-gapped. Sandfly easily works in isolation without any need to communicate externally to anyone.

Sandfly easily has the lowest CPU impact of any Linux EDR product on the market. In fact, Sandfly was designed from the beginning to run without making your life worse by consuming massive CPU resources on your critical infrastructure.

Sandfly goes on a host to do intermittent and random security sweeps. These sweeps take normally 30-60 seconds to complete and then vanish. The result is that CPU impacts blend into normal system operation and most users don't report seeing anything unusual even on heavily loaded boxes.

Further, the way Sandfly operates it avoids doing things like massive file scanning, scan on open and similar activities which are extremely expensive in terms of CPU and disk impacts (and work poorly for finding Linux intruders anyway). Sandfly even allows you to tailor the sweep priority level to your tastes. By default we run on a medium-low setting which will rarely ever cause a system impact, but you can lower it even further if you wish with essentially no impact on how we work.

SSH keys are handled very carefully by the Sandfly platform.

When you add SSH keys to Sandfly to gain access to your Linux systems, they are immediately encrypted with elliptic curve cryptography using keys unique to your installation. At that point, the SSH data is unrecoverable even if the database contents are completely compromised.

With the above, a compromise of both the server and node simultaneously would be required to compromise SSH keys for your systems. As users do not interact with the scanning nodes, these systems can be kept in a highly secure configuration with limited access making it extremely difficult to get both components to initiate a credential theft.

For customers that do not want any credentials stored, or who use SSH key certificates with short expiration times where storing credentials is not useful, you can deploy Sandfly in our "ad hoc" mode. The ad hoc mode allows you to pass in scan requests with one-time use credentials that are not stored by Sandfly anywhere.

No. The forensic engines used by Sandfly are carefully designed to not allow any external commands to be run. This is part of our security model. The engines are purpose built to gather Linux forensic data without relying on any external programs and without allowing an operator to run anything remotely.

This capability helps you continue to use segmentation to secure at the network level, and ensures that attackers on remote systems will have a very difficult time determining your operating network if you wish to remain hidden.

No. Sandfly does not tie into your kernel or core system libraries. You can update your systems as often as you'd like and it won't bother Sandfly. Further, Sandfly won't bother your updates,  system stability, or certifications by modifying the remote hosts.

Absolutely. Sandfly works extremely well on limited bandwidth situations and we have customers deploying our product into remote locations without issue on cell phone networks, etc.

Yes. Linux rootkits are easily seen by Sandfly, even if they are trying to hide. We have a variety of methods for detecting and de-cloaking rootkits that are hiding processes, directories, files and users.

In the example below we have de-cloaked a Diamorphine rootkit module trying to hide. We have many mechanisms for finding common and not-so-common rootkit hiding methods. 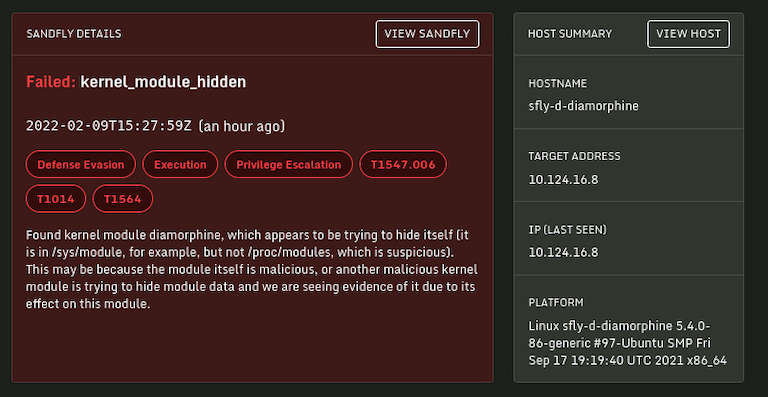 Still not sure what license is right for you?